Collection of Indonesian Food Names and origins that are not yet widely known.

Indonesia holds a lot of unique culinary wealth.  Ranging from traditional food to modern.  In addition, in various regions scattered in Indonesia, there are distinct characteristics of cuisine, this is what distinguishes the region from one another.  Unfortunately, there are many food names and origins that are not yet known even by Indonesians themselves.

Maybe some of these people know the name of the food but don't know where it came from.  Others may not know it at all.  In fact, most types of cuisine in Indonesia have delicious but unique flavours.  For example, unique in terms of its name, the history behind it, there are only certain areas or rarely encountered and many more.

Indonesia is also rich in diversity in food processing.  Starting from fried, steamed, baked, baked until the ingredients are mixed.  This also makes a variety of Indonesian culinary tours very many kinds.  So, it is not complete if you as an Indonesian do not know the typical Indonesian food and uniqueness that is not widely known below.  Come see. 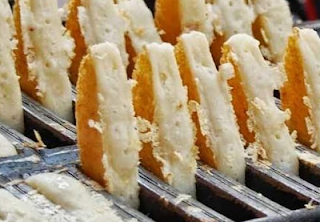 The first food we take from traditional types of cakes.  Have you heard or enjoyed pancakes before?  Pancong cake is a cake that has existed since time immemorial.  But, until now this cake is still there and actually tastes a lot of taste.

The taste is more attractive with a unique shape that is half a circle.  The main ingredients are also very simple namely large flour, coconut milk, coconut and salt tablets.  Pancong Cake is also called by the name of Cake Gandos or Kue Rangin which is a typical snack from the island of Java.

In some areas, this food is quite famous with different titles.  For example, the Bandung people call it the Bandros Cake, the Balinese call it the Daluman Cake and the Bojonegoro people give the name by the name Tratak.  Very unique is not it? 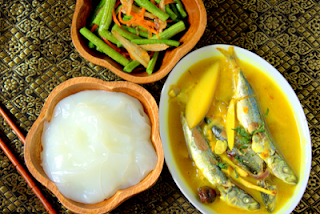 Papeda or sago porridge is a typical food from the Maluku region, South Sulawesi, with another name kapurung.  In some areas, papeda may be widely known, but in some other areas, most people do not know it at all.  Papeda has a unique taste and presentation.

Papeda is served by watering it with hot water until it expands.  As for the side dishes, the tuna or coal which have been seasoned with turmeric.  Coupled with spicy fish soup and vegetables made from a mixture of papaya leaves, cassava and sweet potatoes.  Papeda or Kapurung is best when it's still hot. 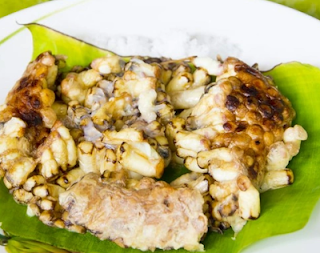 At a glance from the name maybe you are already curious about the appearance of this food.  But, not with people who already know him.  Not many people know about this food.  The mention is a little strange may still feel strange to the ear.  Tawon shell itself is a typical food originating from Central Java and East Java.

At first glance, it looks like this food will look like a wasp nest hole with black eggs inside.  These are young bees or larvae that are still in the hive.  Very unique is not it?  Not only unique, but this food is also healthy and delicious.  However, to find this food will be difficult because the main ingredients are increasingly rarely found beehive. 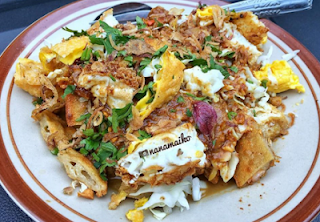 Gimbal Tofu is the next culinary that must be known by Indonesians.  This food is typical culinary from the city of Semarang.  Made from a mixture of fried tofu, bean sprouts, chopped cabbage, eggs and rice cake and served with a sprinkling of runny bean spices is a characteristic that is not found in other types of food.  Besides this food is added special with the addition of shrimp paste tablets.

The food that is quite popular in the area, that is cat rice, cannot be missed when you visit the city of Yogyakarta.  This food can be found easily in angkringan stalls scattered in an area called this student city.  In other areas, many people do not know it as typical food from Indonesia.  Though food consisting of various kinds of side dishes on the satay can be a delicious culinary choice.

You might ask, why is it called cat rice?  Actually it has nothing to do with cats or not because there is a mixture of cat meat.  But in terms of the portion of rice is very minimal or a little like cat food.  This is why it's called cat rice.  Plus because the way of presentation is wrapped in banana leaves or rice paper as his trademark

Enjoyed this article? Stay informed by joining our newsletter!

Related Articles
Lifestyle
Movies To Watch While You Are In Quarantine
Mar 30, 12:26 PM - Arshdeep Singh
Lifestyle
Self-Quarantine: Activities to at home in Coronavirus Quarantine
Mar 25, 12:31 AM - Md Sohail
How To
Internship-The Most Strategic Way To Kick Start Your Career
Mar 20, 9:38 PM - Md Sohail
Health
Proven Strategies on How to Gain Weight in Less Than 30 Days
Feb 25, 3:54 AM - Md Sohail
Facts
10 unknown facts about the Taj Mahal you will be shocked to know
Feb 2, 11:35 PM - Hasan Sk
Health
How twins are born, symptoms, causes
Feb 2, 5:03 PM - Anuj kushwaha
About Author

Get the latest information from the Ministry of Health and Familty welfare about covid-19.